Which language was patient zero for the old expression, “We’ve been smallpoxed and measled”? 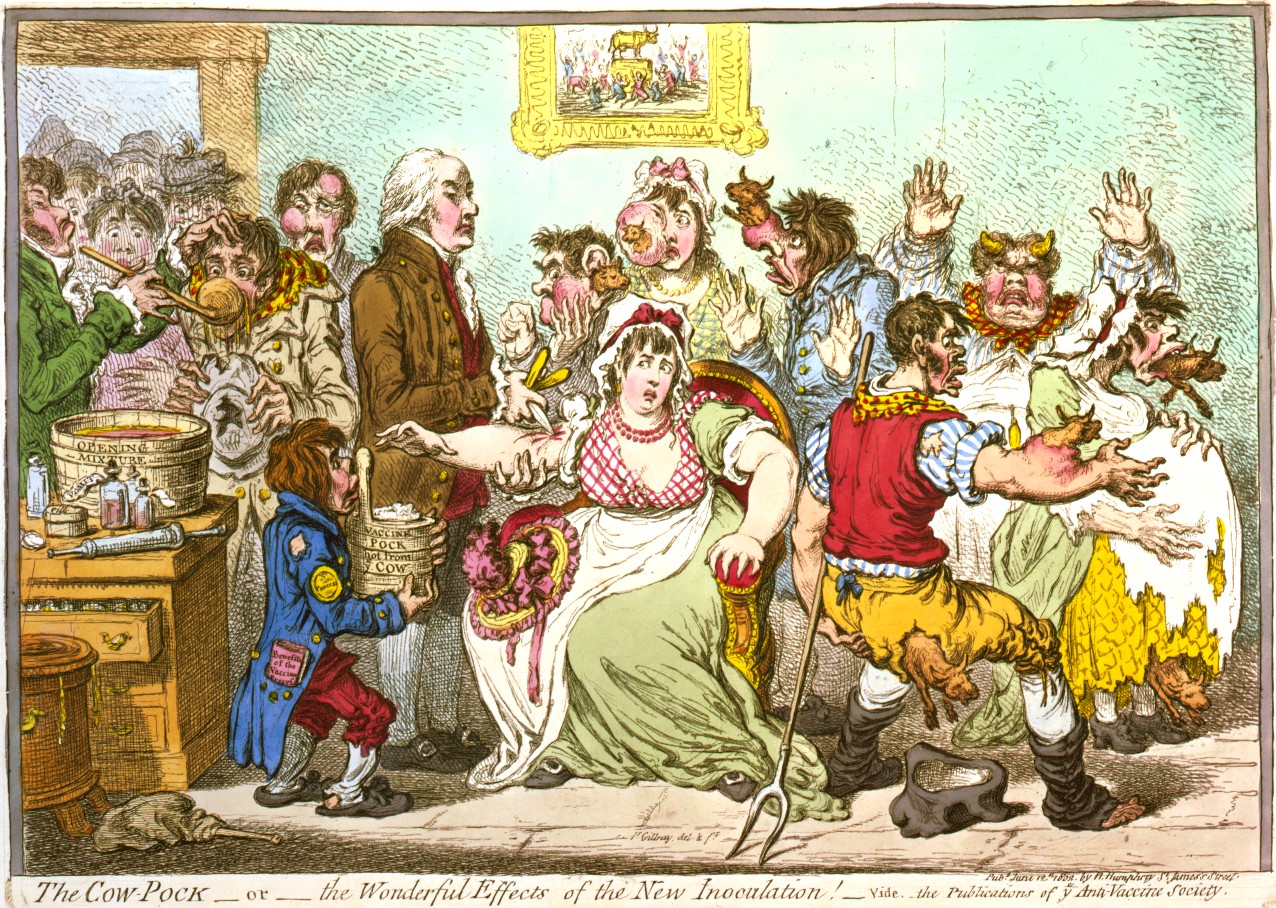 An 1804 cartoon caricaturing the Smallpox and Inoculation Hospital in St. Pancras, London. Wikipedia.

Observation
Philologos
About the author


Philologos, the renowned Jewish-language columnist, appears twice a month in Mosaic. Questions for him may be sent to his email address by clicking here.

Got a question for Philologos? Ask him directly at philologos@mosaicmagazine.com.

I wonder if you can shed light on the following. I have heard elderly couples remark, when reminiscing about the trials and tribulations they have gone through in their lives, “Mir hobn gepokt un gemozelt.” Although I understand the intent of the phrase, its exact meaning and origins elude me. Can you help?

A literal translation of the Yiddish expression that Mr. Klein asks about is “We’ve been smallpoxed and measled” or “We’ve had smallpox and measles.” In ordinary English one would say, “We’ve been through it all.”

Smallpox and measles were two of the most feared diseases in Yiddish-speaking Eastern Europe, as they were, before the introduction of vaccines, all over the world. Both could be fatal, particularly to children, and it was children who contracted them most often, since adults who had been exposed to them in childhood developed a lifelong immunity. Once you had them, you didn’t get them again, suggesting that a better translation of mir hobn gepokt un gemozelt might be “We’ve survived smallpox and measles,” that is, “We’ve taken what life had to throw at us and we’re still here.”

The Yiddish expression, however, needn’t always have such a dramatic sense. It can also refer to any kind of lengthy experience with something, as in a sentence like, “Vegn genitste vashmashinen, mir hobn gepokt un gemozelt,” “When it comes to second-hand washing machines, we know all there is to know.”

Interestingly, there’s one other language besides Yiddish that has the same expression. That’s Dutch, in which wij zijn gepokt en gemazeld, means “we’re veterans” or “we’re old hands,” and “het is gepokt en gemazeld” might be translated as “that’s been tried and tested.” To get it right, you have only to remember that the Dutch consonant “g” is pronounced gutturally as in, say, Hebrew/Yiddish ḥamets (which comes to mind, I suppose, because Passover is almost upon us).

All of these words entered Dutch from the Western Yiddish, with its Ashkenazi pronunciation of Hebrew, that was once spoken in Germany, Switzerland, and Holland and is now also extinct. If anything, however, they would tend to indicate that Dutch did not take gepokt en gemazeld from Yiddish. It’s no accident that they, and practically every other word that Bargoens borrowed from Yiddish, came from the latter’s Hebrew rather than its Germanic component. Thieves’ argots are meant to be incomprehensible to outsiders, and Hebrew, which non-Jews didn’t know, was ideal for that purpose. By contrast, the Germanic words pokken, smallpox, and mazelen, measles, are perfectly good Dutch. Why would a Dutch thieves’ argot have borrowed an expression using them?

Moreover, there is documentation that gepokt en gemazeld was already in use in Dutch centuries earlier. In François Halma’s 1698 lexicon, for example, we find the sentence die wijn heeft al gepokt en gemazeld; is heel zuiver en oud, “The wine has already been smallpoxed and measled; it’s pure and old.” Similarly, in the Hollandsche Spectator, a Dutch weekly published in the 1730s, one finds it said of an elderly woman, “Zij is boven pokken en mazelen; het is eene oude vrijster,” “She is beyond smallpoxing and measeling; she is an old spinster.” Evidence also exists that at least some German dialects had a similar expression, although nothing like it is known, to the best of my knowledge, to German speakers today.

In all likelihood, then, gepokt en gemazeld was introduced into East European Yiddish by Western Yiddish speakers who picked it up from their Dutch or German neighbors before migrating eastward. Dutch pokken and mazelen are, of course, close cognates of English “pox” and “measles,” as are German Pocken and Maseren. (German has also retained the word Maser, a cognate of Middle English “masel,” in the sense of a speck or fleck, which is how the disease got its name.)

“Pox,” an alternate spelling of “pocks,” mutated into “smallpox” in English after syphilis was brought back to Europe by sailors in the age of Columbus. When, because of the large chancres that pock the body in its early stages, syphilis also came to be called “the pox,” the childhood disease known until then as “the pox” was differentiated by being called “the small pox.” As for the chickenpox—Dutch windpokken, German Windpocken—it isn’t clear how it got its name. One theory is that it goes back to Middle English “yicche” or “icchen,” meaning, “to itch,” which was subsequently folk-etymologized into “chicken.”

While researching this column, I found no sign of “poxed and measled” ever being an expression in English, but I did find a hint that “to pox” and “to measle,” in the sense of “to get the chicken pox” and “to get the measles,” may have been in use and in fact may still be. The English spoken in Canada’s Atlantic maritime provinces, as is known, has certain peculiarities of its own, some of them owing to the Scots origins of many of the region’s inhabitants.

In a 2010 children’s book by the Nova Scotia writer Liz Trigg, I came across a curious passage. It occurs in a chapter relating how the book’s protagonist Libby, trying to avoid the wet kisses of her Aunt Liz, pretends to have the measles by making red marks on her body before one of Liz’s visits. When her aunt approaches her anyway, her brother Jack shouts, “You can’t kiss her! She got measled.” To which Liz replies, “I don’t care if she’s been measled or poxed, the poor little thing, that isn’t going to keep ol’ Aunt Liz from kissing her.”

Is this a peculiarly Nova Scotia usage or just the idiosyncratic English of the book’s characters? Mosaic’s Nova Scotia readers are invited to write in.

Got a question for Philologos? Ask him directly at philologos@mosaicmagazine.com.

How to Confront a Crisis of Cultural Confidence

My Early Life with Arabic